Crows are very social and intelligent animals. The groups of crows in your backyard are extended families who share food and look out for each other, like many of our own families. Some young crows help their parents care for younger siblings before breeding themselves. Crows work together to mob a threatening predator or another crow attempting to move in on the group’s territory.

A crow family can eat 40,000 grubs, caterpillars, armyworms and other insects in one nesting season. That is an immense amount of insects that many gardeners and farmers consider pests. These good environmental citizens also transport and store seeds, thus contributing to forest renewal. And their habit of eating carrion makes them part of nature’s cleanup crew. 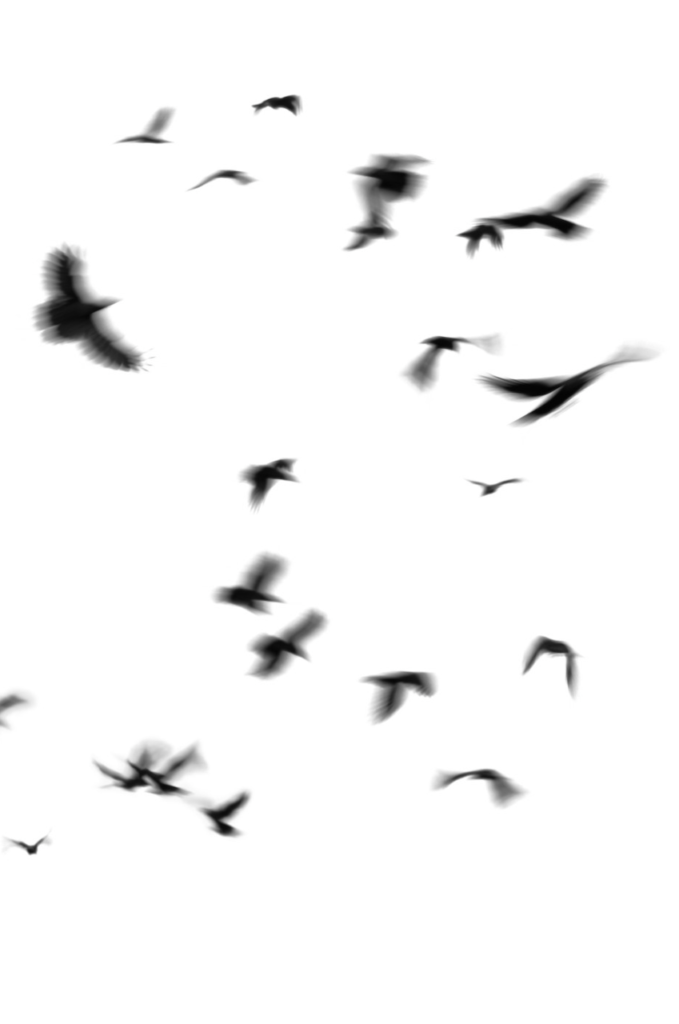 What attracts crows to urban areas?

American crows use almost any combination of woodland, farmland, orchard or suburban neighborhood. Like other common urban wild neighbors, they thrive in the habitat we create. Crows increased and spread when Europeans colonized North America. As agriculture and urbanization spread, so did crows.

Crows’ sociability can be hard on human neighbors where large winter roosts form in cities and towns. Crows from colder places migrate to join crows who live near the roost year-round. Communal roosts offer protection. But the noise and mess of a large winter roost in town make for hard feelings among human neighbors. Fortunately, these conflicts can be resolved humanely.

For all conflicts with crows, making the area where they are unwelcome less attractive to them will help. Trash, food waste in open compost, pet food and food put out for other wild species are all attractive to crows. Especially important: Keep crows out of food sources.

Keeping crows out of trash is easy: Consistently use intact and secure trash containers with tight-fitting lids. Trash bags or overfilled bins will invariably attract crows, who easily open the bags to retrieve what they want.

Crows visit trash by day; trash that is scattered overnight is the work of others—dogs or, perhaps, raccoons—but may be unjustly blamed on the crows who the homeowner sees in the morning eating the leftovers after the real culprits are gone. No matter who gets in the trash, simply putting lids on is enough to keep out crows. 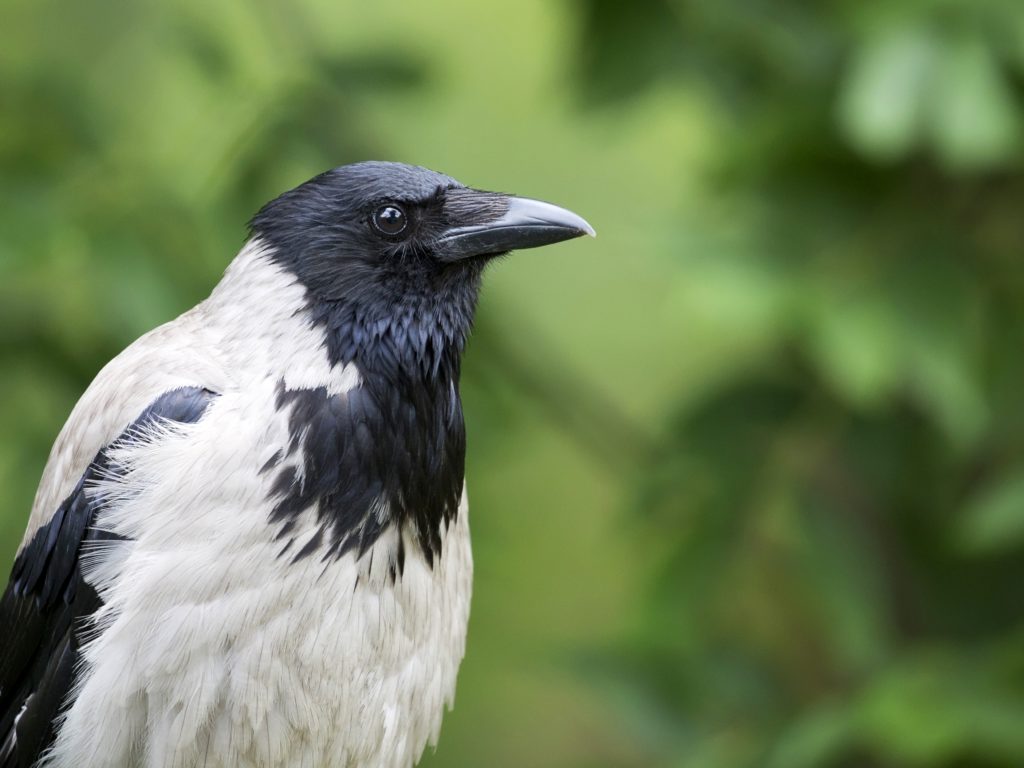 Crows began abandoning rural roosts for towns and cities in the 1960s. Now many crows commute to the country, visiting cornfields and pastures to forage by day before returning in late afternoon to urban roosts. Some crow roosts formed at the edge of urban areas for years and has been simply engulfed by spreading development. But that’s not the case for all roosts. Some towns have been adopted by large crow roosts, even some old downtown areas.

Why have crows made this shift? Mainly because we create excellent crow habitat with ample food nearby. Other factors that may contribute:

The same roost locations have been used for decades or longer. One in New York has been used for over 125 years. Roosts can host from a few hundred birds to hundreds of thousands.

Crows form large roosts in late fall and stay until early spring when they return to their breeding territories. These winter roosts can be especially large in places where northern migrants augment local crow populations. Northern locations in the United States and Canada may have large roosts only in the summer and fall because these birds migrate south for the winter. There are some year-round roosts in California.

People complain about the mess and noise around urban roosts. Droppings on walkways and vehicles are an aggravation. The crows’ loud cawing and calling at roosts tend to be noisiest right before dawn—even on weekends.

Humane harassment can move crows who roost in undesirable locations. The jury is still out on when this works best, but we feel it is when roosts are just beginning to form for the season, before crows are well settled in. Roosts are also easier to relocate when they are just being established at a new location—before the crows have spent many seasons using the same spot. So, start as soon as it’s clear there’s going to be a conflict.

Successful programs combine techniques. Used together, each of these techniques reinforce the others to convince crows the roost location is unsafe:

One community moved a neighborhood roost by just having people out on the sidewalks with noisemakers at dusk for the better part of a week. Apparently, the crows did not like the party-going human neighbors every night.

Reducing outdoor lighting may make the area less attractive to crows. Turn off outdoor lights, use lights aimed towards the ground, or use a motion-trigger that only turns on lights when someone enters the area. While recognizing the value of mature trees, selective thinning and pruning trees can reduce crow use.

Pushed from their roost, crows generally move to the nearest similar site. There will still be crows in the community, just not in the objectionable roost location. Allow the crows a roost site with a stand of tall trees in the same general area as the site where they are unwelcome and do not harass them there so they will leave a problem site more readily. 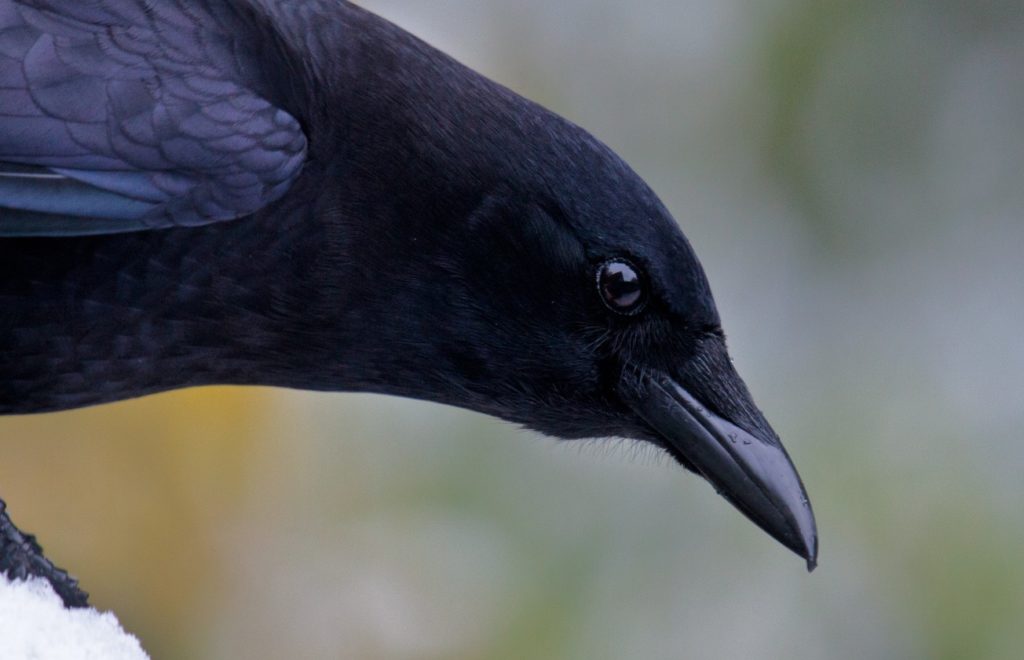 Crows are sometimes blamed for garden damage caused by other animals. Crows hanging around to eat insects and grubs may or may not also help themselves to fruits and vegetables. On balance, the benefits from crows eating insects, grubs and waste grain may outweigh a little damage.

You can ban crows from small gardens.

As long as crows have enjoyed our tasty crops and produce, we have been trying to frighten them away. What have we learned?

Competition with Other Backyard Birds

Food put out to attract songbirds will also be attractive to crows. Backyard bird feeders who want to attract only smaller birds can simply use feeders that exclude larger birds. 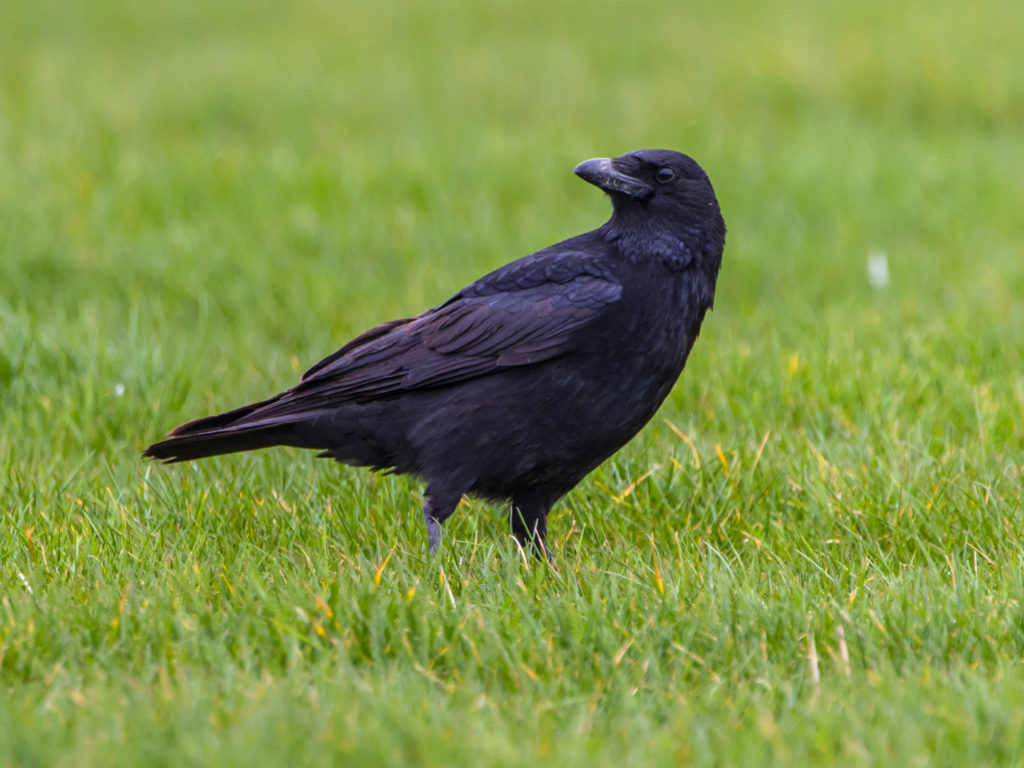 Why Poison is not the Answer

A few communities looking for a quick fix to crow roost nuisance killed crows with slow-acting poison DRC-1339. Killing crows doesn’t cause the survivors to leave town. It merely allows more of the next season’s young to survive due to less competition for resources. Changes in crow numbers are very short term. Additionally, under Ordinance No. 36 that HAP helped passed, it is illegal in Pittsburgh to harm any wild bird. As such, it is strictly prohibited in the City of Pittsburgh to use poison or other inhumane methods.

DRC-1339 kills by damaging the kidney and heart. Poisoned birds die slowly over about one to three days. It is inhumane to the crows, who are killed merely for being inconvenient. And the poison may sicken or kill other animals (called non-target animals). Crows hide food for later. Any animal can find and eat these caches, not just crows.

Lancaster, Pennsylvania, was one such community that reached for a quick fix. Local people and bird lovers nationally voiced their strong objections to poisoning crows. Penn State researchers looked at what happened after the poisoning and found that it did not work. Local officials abandoned plans to poison again the next year and worked with local crow lovers to start a humane harassment program instead. Volunteers from the ranks of local people who condemned the poisoning assist with the seasonal harassment work. In its first season, the program successfully moved the large downtown roost from its prior problematic site. The crows shifted to a more industrial area; a less problematic site. By the end of its second season, the program moved crows out of most of the city to roosts outside Lancaster.