When it comes down to it, hazing and securing food sources are more effective at solving coyote problems than killing.

When it comes to understanding how to get rid of coyotes, you should first understand their role in the ecosystem. Coyotes play a large role in keeping rodent populations down, so while their propensity to dine on pets and livestock can be troublesome for homeowners and farmers, retaliating in an inhumane way is certainly not the answer. 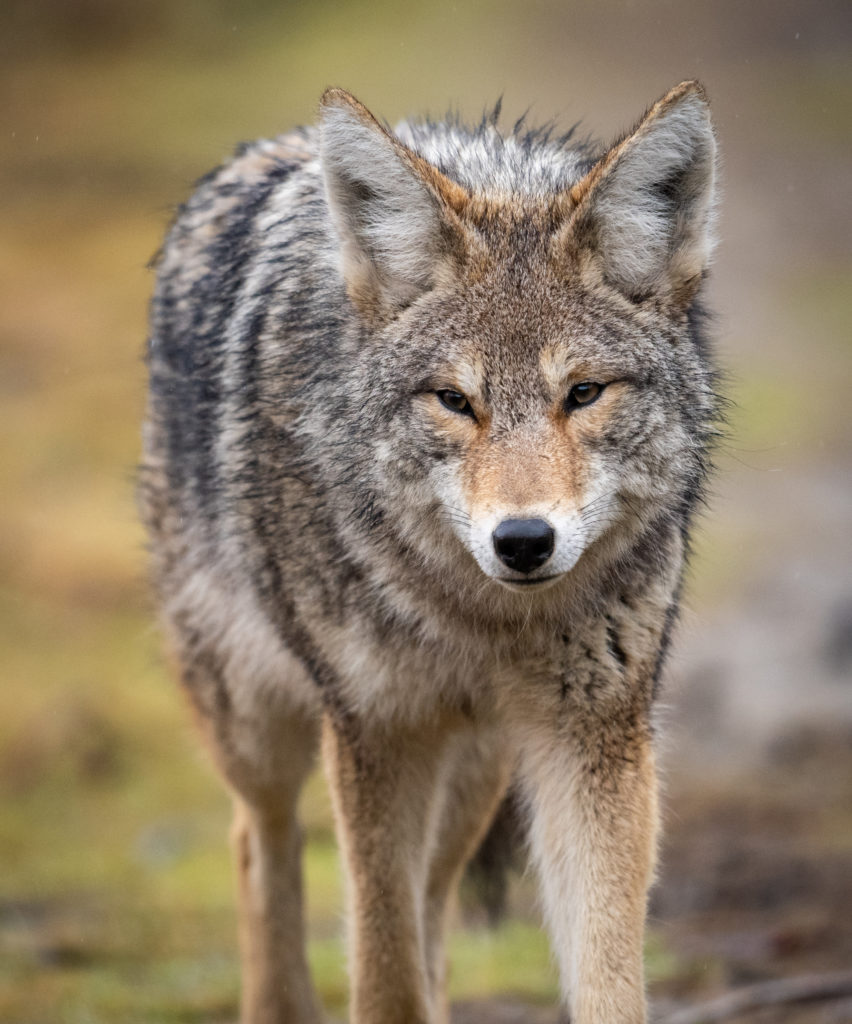 If a Coyote is in Your Neighborhood

If you spot a coyote in your neighborhood, don’t panic. Most coyotes avoid people. Seeing a coyote out during the day is not a cause for alarm, especially in the spring and summer when they’re looking for food for their pups.

If a coyote displays no fear of people, he’s probably been fed. You can reinstill his fear by raising your arms and yelling to drive him away. This is called hazing. Unlike trapping, which sometimes catches pets or other wildlife but rarely the coyotes that are causing the problems, hazing works.

Coyotes may mistake small, unattended pets for prey or attack large dogs they view as threats to territory or dens. To keep your animals safe, take two simple steps:

Watch your pets. Keep cats indoors, and never leave small dogs outside unsupervised or let any dog out of your yard off leash.

What To Know If You See or Encounter a Coyote

An encounter with a coyote in an urban or suburban landscape is a rare event, even when coyotes are found in large numbers.

Coyotes are generally nocturnal and seldom seen. You may catch a glimpse of a coyote, however, as they move from one part of their territory to another in search of prey (usually small mammals such as mice and voles).

Observing a coyote in this manner (even during the daytime) does not mean that the coyote is sick or aggressive. If the coyote is scared away by your presence, they are exhibiting natural behavior and is not cause for concern.

A coyote that does not run away when encountering humans has, most likely, become accustomed or habituated to people. This generally occurs when a coyote has been fed (in the form of handouts, pet food left outside, or unsecured garbage).

Coyotes who come to depend on these sources of food may begin to approach humans looking for a handout and may begin to exhibit what’s perceived as “too tame” or aggressive behavior.

When coyotes become habituated, hazing can reinstill the natural fear of humans. Hazing entails using a variety of scare techniques to teach a coyote to regard people as threatening and stay away from them.

Coyotes who have lost their fear of humans should not be tolerated or enticed but instead given the clear message that they should not be so brazen.

Hazing is a method that makes use of deterrents to move an animal out of an area or discourage an undesirable behavior or activity. Hazing can help maintain a coyote’s fear of humans and deter them from backyards and play spaces.

Using a variety of different hazing tools is critical so that coyotes don’t get used to redundant or single stimulus devices, sounds, and actions.

The simplest way of hazing a coyote involves being loud and large: 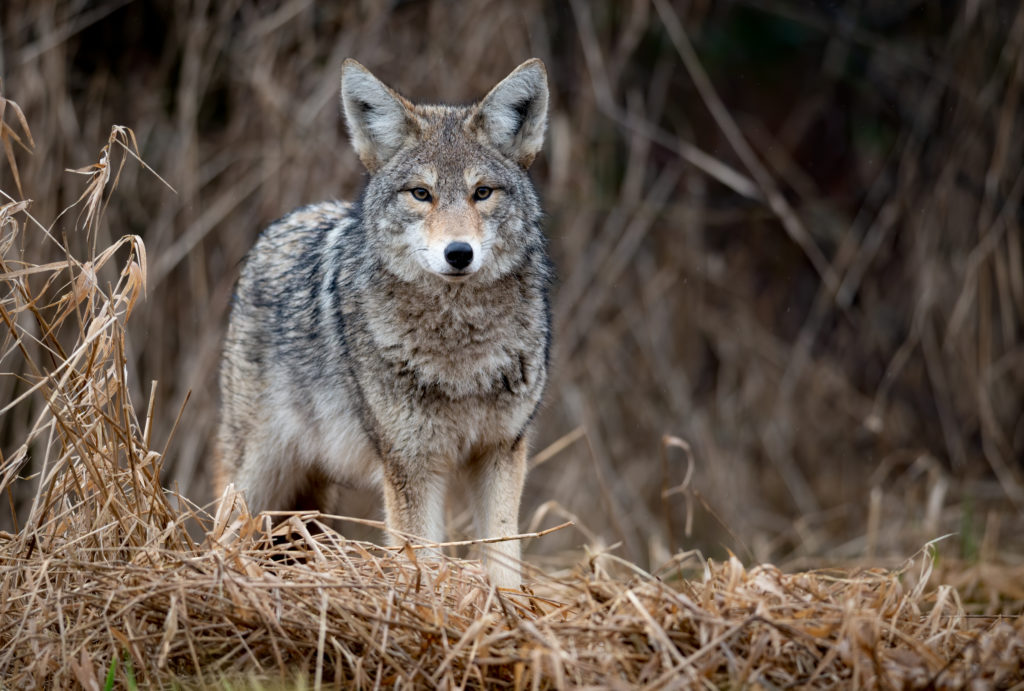 There are several tools that you can carry with you while walking your dog that can be used to repel coyotes. These include: 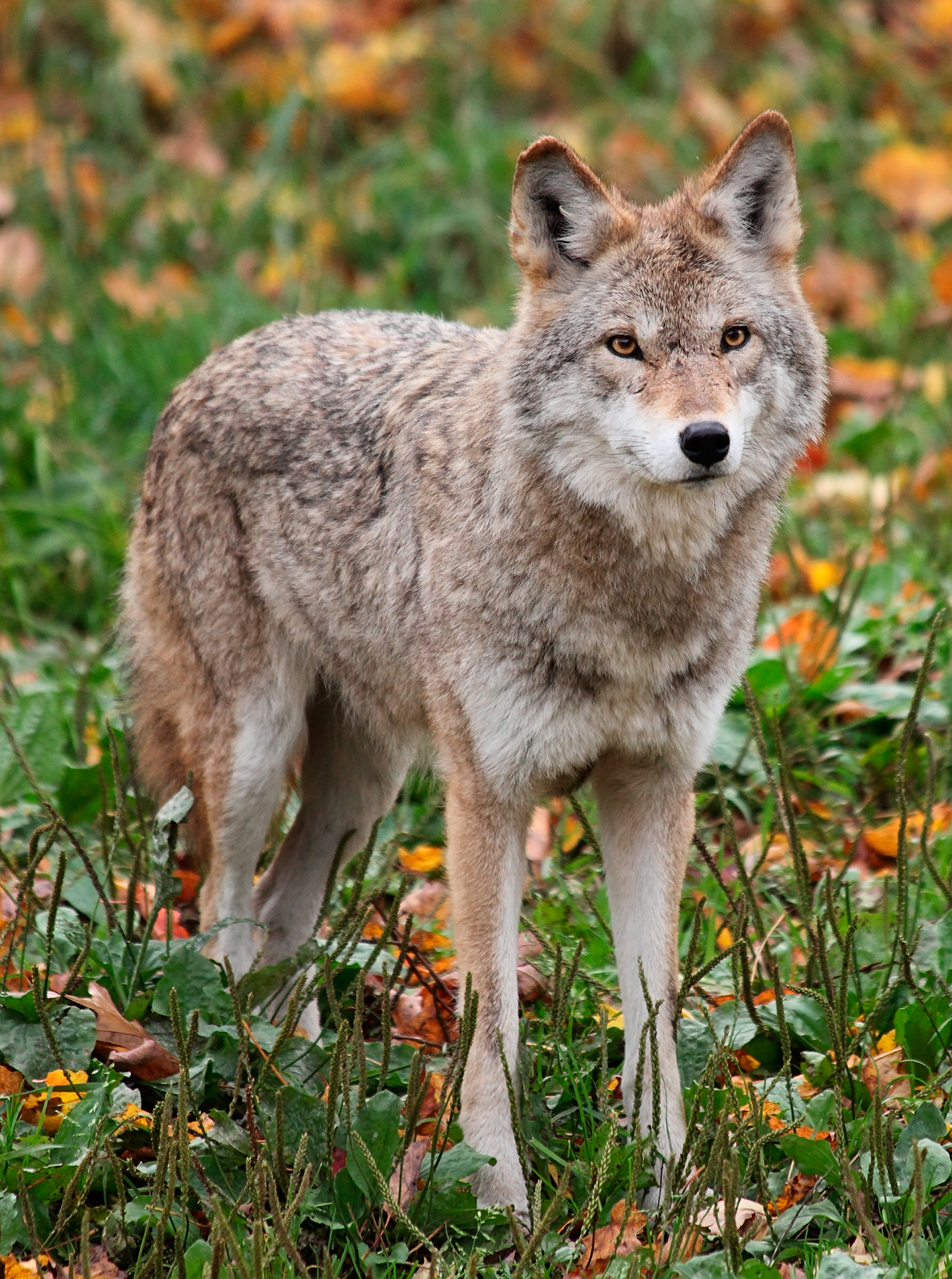 Remember, keeping pets and pet food inside is the best way to keep coyotes out of your yard. If you do encounter coyotes, all of the above methods can be used in your yard at home. First, try the, “Go away coyote,” method (yell and wave your arms as you approach the coyote). Here are some additional methods you can use as well:

If a coyote needs to be evicted from one of these areas, use harassment strategies such as sweaty socks sprinkled with vinegar in the den entrance along with a blaring radio. This will take time and patience as coyotes can be resistant and will also need time to find or create a new den.

One of the most effective ways to keep coyotes out of your yard is to keep it clean and to build a fence to keep them out. For example, you must keep your garbage cans secured inside, you need to keep your pets’ food inside, and you need to pick up any fallen or rotting food off the ground. To make this strategy even more effective, build a fence around your property.

Fencing can be used to keep coyotes out of residential yards, but it must be at least 6feet tall and should extend underground at least 6 inches or be parallel to the ground at least 12 inches and secured with landscaping staples. Devices such as the “coyote roller,” which “rolls off” coyotes that try to scramble over the fence, can enhance the effectiveness of a fence.  Do-it-yourself options also include adding PVC piping or chicken wire to the top of your fence to prevent coyotes from jumping over and retrofitting a mesh apron to the bottom of the fence (extending at least 12 inches out and secured with landscaping staples) to keep coyotes from digging under.

Coyotes, like all warm-blooded animals, may contract rabies. Their close kinship to dogs places coyotes at a greater risk where there are populations of unvaccinated domestic dogs. Recent advances in rabies control using oral bait to immunize wild animals without having to capture them have made controlling the spread of rabies in coyotes much more effective.

Other Tips for Your Property

If you have a coyote in your shed, open the door and stand away from the entrance. Never try to remove a coyote yourself since it may carry rabies and could defensively attack you. Once the coyote exits, make sure all entrances to the shed have been securely closed.

If you have a chicken coop, and there are coyotes in your neighborhood, you can bet one will come to investigate. In that case, install a tall fence (the taller the better!), to keep your chickens safe.

Install motion-sensor lights outside of your home, garage, chicken coop, and sheds. When the lights turn on, the coyotes will be alarmed and run off. A motion sensor that triggers a sprinkler system is also a good idea.

What Attracts Coyotes to Cities and Suburbs

However, the presence of a free buffet in the form of pet food or garbage can lure coyotes into suburban yards and create the impression that backyards are bountiful feeding areas.

Without the lure of food or other attractants, their visits will be brief and rare, but a coyote who finds food in one yard may learn to search for food in others.

Deliberately feeding coyotes is a mistake. You may enjoy hand-feeding animals, but this is a surefire way to get them accustomed to people and will ultimately lead to their demise. Here are some other general rules about feeding:

Coyotes are secretive animals, and studies have shown they can live for a long time in close proximity to dense human settlements without ever being noticed. Such coyotes are “abiding by the rules” and should be left alone.

In the spring, when coyotes give birth and begin to raise young, they concentrate their activity around dens or burrows in which their young are sheltered. At these times, the parents may become highly defensive and territorial, and challenge any other coyote or dog that comes close to the pups. People walking their dogs in parks or wooded areas may run into these coyotes and even be challenged by them to back off.

Rarely, fights occur, probably most often when a dog is off its leash and chases a coyote. It’s important to recognize such incidents for what they are: Defense of space and young, not random attacks. If you encounter a coyote when walking your pet, do not run away; scare off the coyote with hazing techniques.

Free-roaming pets, especially cats and sometimes small dogs, may attract coyotes into certain neighborhoods. The best way to minimize risk to your pets is to not leave them outside unattended.

Other domestic animals kept outside, such as chickens and rabbits, may also be viewed as prey by coyotes. Protect chicken or other outdoor animals from coyotes (and other predators) with protective fencing (both structural and electrical) and by ensuring they are confined in sturdy cages or pens every evening.

Coyotes typically hunt small mammals such as mice, voles, and rabbits. If given the opportunity, they will also make a meal of a cat, tame or feral.

Dogs, especially smaller breeds, are also at risk, although attacks on them are rarer.

The best way to protect your pets is to only let them outside when you are with them- especially at night- and to keep pet food and water inside.

People who feed feral cats are often concerned that coyotes might prey on the cats. These concerns are well founded, as coyotes will be attracted to both the outdoor pet food and the cats themselves as prey. Here are some general suggestions for keeping cats safer: 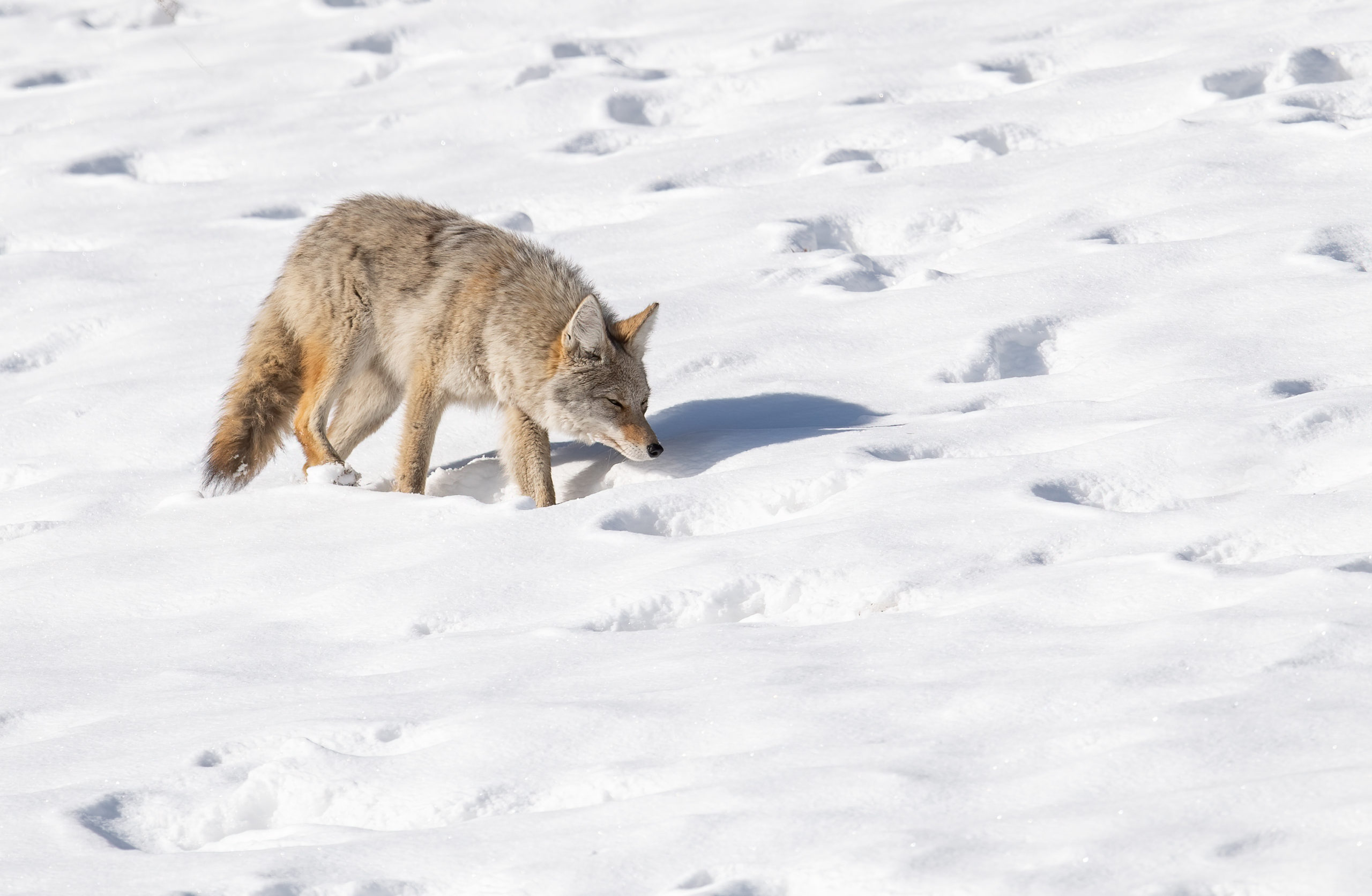