How to Tell if Wildlife is Injured or Orphaned?

How do you tell if wildlife is injured or orphaned? It’s common to see baby wild animals outside during spring.  They may appear to need our help, but unless the animal is truly orphaned or injured, there is no need to rescue them. These tips can help you decide whether to take action.

Signs that a wild animal needs your help:

If you see any of these signs, find help for the animal. If necessary, safely capture and transport them to the appropriate place for treatment.

Whether an animal is orphaned and needs your help depends on their age, species, and behavior. Babies of some species are left alone all day and rely on camouflage for protection, while others are tightly supervised by their parents. Read on for descriptions of what’s normal for each species.

If baby birds are clearly injured or in imminent danger, contact a licensed wildlife rehabilitator. If featherless or nearly featherless baby birds have fallen from their nest but appear unharmed, put them back in the nest if you can do so without danger to yourself.  Understand that it’s a myth that mother birds will reject their young if a person touches them.

Fully feathered birds: If the original nest was destroyed or is too high to reach, hang a small, shallow wicker basket close to where the original nest was. Woven stick baskets from garden stores or supermarket floral departments work well; they resemble natural nests and allow rain to pass through so the birds won’t drown. Adult birds won’t jump into anything they cannot see out of, so make sure the basket is not too deep. Put the fallen babies into the new nest and keep watch from a distance for an hour to make sure the parent birds return to the new nest to feed their chicks. Watch closely, because parent birds can be quite stealthy. If they definitely do not return, contact a licensed wildlife rehabilitator.

Nearly or mostly featherless birds: These birds will become too cold in a makeshift nest, so you must place them in the original nest. If that’s not possible, take them to a licensed wildlife rehabilitator. Remember that baby birds do best when raised by their parents or other birds, so try to reunite them with their parents before calling a rehabilitator.

Fledglings: Birds with fully feathered bodies, but short or non-existent tail feathers may be fledglings (adolescent birds who have left the nest). You might see them hopping on the ground, unable to fly. This is normal; birds learn to fly from the ground up! Fledglings might remain on the ground for a few days or even a week, supervised and fed by their parents a few times each hour before they get the hang of flying. You can tell if the fledglings are being fed by watching from a distance to see whether a parent bird flies over to them, usually a few times an hour. You can also look for white-grey feces near the fledgling. Birds defecate after being fed, so the presence of fecal material means that the birds are being cared for. Be sure to keep cats indoors and dogs leashed until the fledglings are old enough to fly. If you are positive that the parents aren’t returning to feed the babies, contact a licensed wildlife rehabilitator.

Rabbits at least four inches long with open eyes and erect ears and who hop well are independent from their mother and should be allowed to fend for themselves. Uninjured baby rabbits in an intact nest should also be left alone. Although they might look abandoned because their mom isn’t around, mother rabbits visit their dependent young only a few times a day to avoid attracting predators. If the nest has been disturbed, lightly cover it with natural materials you find around the nest, like grass, fur or leaves and follow these steps:

A squirrel who is nearly full-sized, has a full and fluffy tail and can run, jump and climb is independent. However, if a juvenile squirrel continuously approaches and follows people, their mom is probably gone. In this case, you should contact a rehabilitator because the baby is very hungry and needs care.

There are a few cases where you might need to intervene:

If the baby and/or their nest fell from the tree today, give the mother squirrel a chance to reclaim their young and relocate them to a new nest. If the baby is uninjured, leave them where they are, leave the area, keep people and pets away and monitor them from a safe distance.

If it’s chilly outside or the baby isn’t fully furred, place them in a shoebox with something warm underneath (like a heating pad on a low setting or a hot water bottle). Be sure to put a flannel shirt between the baby and the heating device, or they could overheat. Do not cover them with anything or the mother might not be able to find them.

If the babies are not retrieved by dusk, take these steps:

People often mistakenly assume that a fawn (baby deer) found alone is orphaned. If the fawn is lying down calmly and quietly, their mother is nearby and they are okay. A doe only visits and nurses their fawn a few times a day to avoid attracting predators. Unless you know that the mother is dead, leave the fawn alone.

Although mother deer are wary of human smells, they still want their babies back. If you already handled the fawn, quickly return the fawn to the exact spot where you found them and leave the area; the mother deer will not show herself until you are gone.

If the fawn is lying on their side or wandering and crying incessantly all day, they probably need help. If this is the case, contact a licensed wildlife rehabilitator.

Fox kits will often appear unsupervised for long periods while their parents are out hunting for food. They will play like puppies around the den site until the parents decide they’re old enough to go on hunting trips. Then they will suddenly disappear. Observe the kits from a distance; if they seem energetic and healthy, leave them alone. If they appear sickly or weak, or if you have reason to believe both parents are dead, contact a licensed wildlife rehabilitator.

Baby opossums are born as embryos, barely larger than a bee, and spend about two months nursing in their mother’s pouch. When they get to be about three to four inches long and start riding around on their mother’s back, they may fall off without the mother noticing. As a general rule, if an opossum is over seven inches long (not including the tail), they’re old enough to be on their own. If they’re less than seven inches long (not including the tail), they are orphaned and you should contact a licensed wildlife rehabilitator.

If a baby raccoon has been alone for more than a few hours, they are probably an orphan. Mother raccoons don’t let their young out of their sight for long. Put an inverted laundry basket over the baby (with a light weight on top so they cannot push their way out) and monitor them until well into the nighttime hours (raccoons are nocturnal, so the mom should come out at night to reclaim her baby). You can also put the cub in a pet carrier and close the door. Instead of latching it, prop it closed with an angled stick. When the mother returns, she’ll run in front of the carrier, push over the stick and the door will pop open.

If the mother does not return, contact a licensed wildlife rehabilitator. In spring and summer, people often set traps in a misguided effort to resolve garbage and other “nuisance” issues. Unfortunately, this approach leads to trapped and killed mothers who leave their starving young behind. If anyone in your neighborhood is setting traps, persuade them to use more humane and effective methods instead.

If you see a baby skunk (or a line of baby skunks, nose-to-tail) running around without a mother in sight, they could be orphaned. Skunks have poor eyesight, so if something scares the mother and they run off, the babies can quickly lose sight of them.

Monitor the situation to see if the mother rejoins their young. If the babies are on the move, put on gloves and slowly place a plastic laundry basket (with lattice sides) over the babies to keep them in one spot and make it easier for the mother to find them. Do not put a weight on top of the laundry basket.

If the mother returns to her young, she will flip up the basket and get them. If she has trouble doing this, you should lift the basket to let them out. Remember that skunks are very near-sighted, so fast movements can startle them into spraying. If you move slowly and speak softly though, you will not get sprayed. Skunks warn potential predators by stamping their front feet when they’re alarmed, so if the mother doesn’t do this, you’re safe to proceed. If no mother comes to retrieve the young by dawn, contact a licensed wildlife rehabilitator. 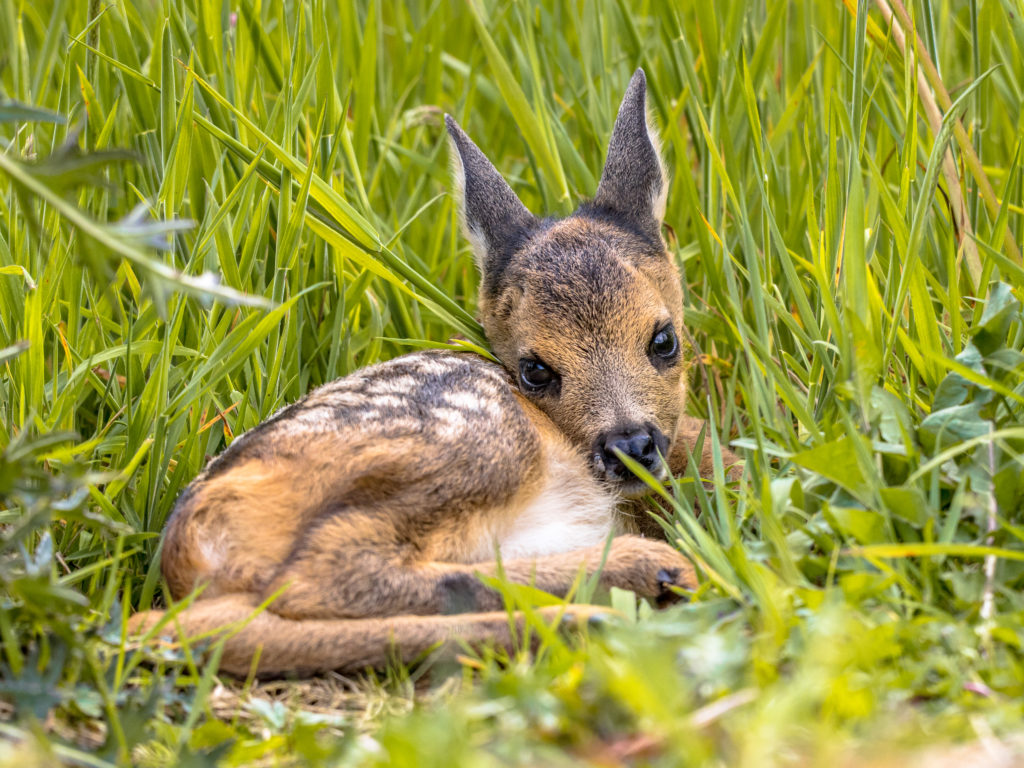 Capturing and Transporting the Animal

Never handle an adult animal without first consulting a wildlife professional. Even small animals can injure you. Once you’ve contacted someone who can help, describe the animal and their physical condition as accurately as possible.

Unless you are told otherwise, here’s how you can make an animal more comfortable for transport while you’re waiting for help to arrive: