Why We Adopt, Don’t Shop

This year, Humane Action Pittsburgh has been working hard to raise awareness about the conditions under which some commercially bred dogs are bred, born, and raised, building on previous work on a Puppy Mill Ban Ordinance. Earlier in October, Aimee wrote about the horror of puppy mills and the ways that some commercial breeders treat the dogs they raise, with little regard for their emotional, physical, or intellectual health.

Knowing how breeders can mistreat dogs and other companion animals doesn’t have to stop loving families from bringing companion animals into their homes. I asked several people from the greater Pittsburgh area to tell me how they made their decisions to adopt, not shop. These are their stories: 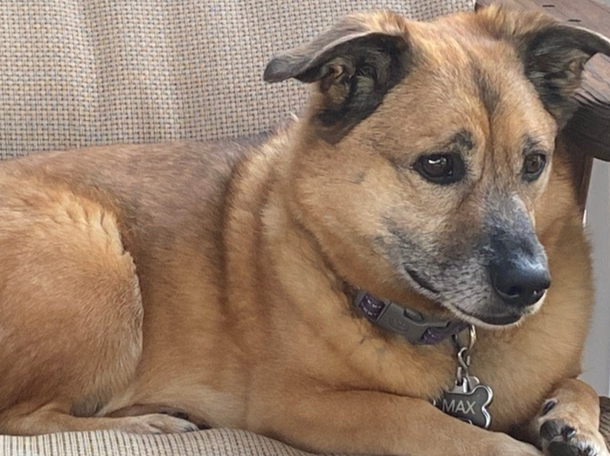 Shelley is a loving caretaker to dog Max. She writes:

This handsome guy is Max.  He came from Fayette County Humane Society.
​
After our wonderful dog Ruby passed away, we made a decision to provide a home for another rescue.  When I went to the shelter, I was looking at all the dogs that were placed front and center.  None of them “did it for me.”

The one volunteer said to me, “There is this dog over here. No one else likes him, but I love him.”

​I asked why no one liked him and she said, “well, sometimes he can be a bit cranky and nip.”

She walked me over to a far cage in a corner on the ground and there was Max, curled up in the back of the cage.

I sat down on the floor cross-legged, and she opened the cage and coaxed Max to come out.  He came out tentatively, saw me, walked over to me, and sniffed.  He then did something amazing; he stepped into my crossed legs, looked up at me and curled down in between my legs.  Needless to say he came home with me.

Almost 8 years later, he still has the attitude, but is a dedicated, loving member of our family.

No one can say where Max would be if he hadn’t been adopted, but we can say where he is now–in a warm, loving, and happy home where he enjoys views of the Youghiogheny River and the company of  his foster-brother, Reggie. 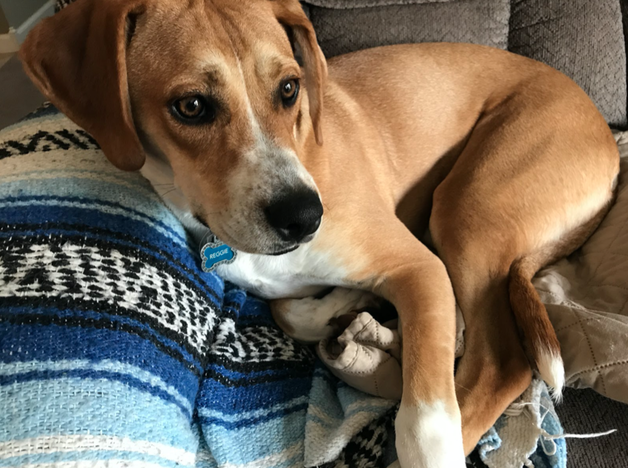 I’d like to introduce my new best friend, Reggie.

His qualifications for becoming my best friend were simple. He is a dog, and we connected immediately. While adding in the facts that I found him alone…in a small pen…in a kill shelter somewhat influenced my decision,  it was his initial laid-back approach to me that instantly won me over.

​As I walked down the line of cages filled with barking, howling canines desperate to get my attention, I came upon the small space where my soon-to-be bestie was…sleeping! Yep, amid the chaos he was soundly napping.

Intrigued, I tapped on the pen several times and finally got a response. The small puppy with the already-adult paws slowing stretched, shook a few times, and wandered over to me. I held out the back of my hand and, without hesitation, he gave me the first of what would be endless kisses. Nothing else. No barking. No jumping around. We locked eyes for a moment and I was hooked. He really knew how to sell it.

He’s now enjoying his forever home, and he daily reinforces the fact that, despite digging holes in the yard and chewing on forbidden objects, I made one of the best decisions of my life.

While it’s heartbreaking to think that otherwise-healthy animals are sometimes euthanized, it’s important to remember that adopt, don’t shop campaigns have significantly reduced the number of such shelters and have reduced the numbers of animals euthanized each year, as documented by the ASPCA. The more of us make the choice to adopt these shelter animals, the fewer animals will be subjected to euthenasia or even just extended, lonely shelter stays. 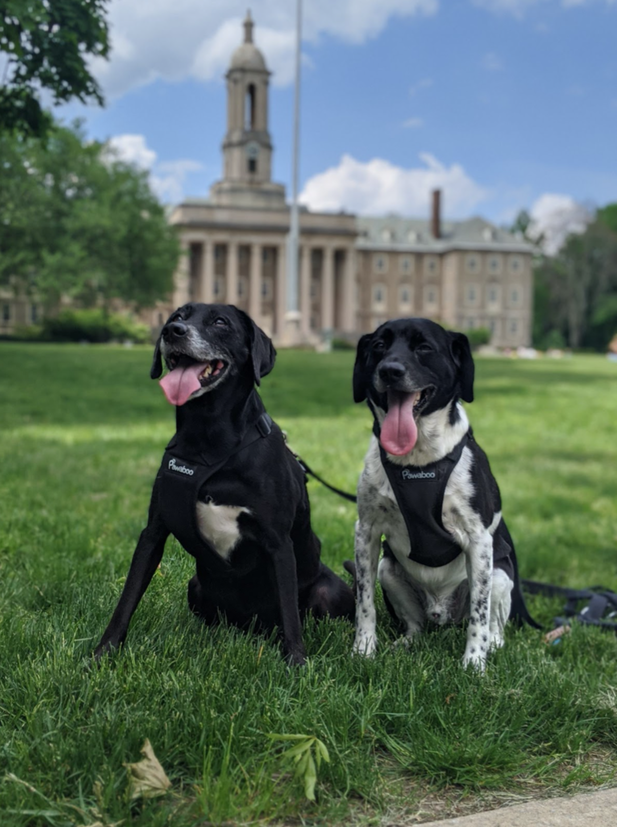 Ellen and husband Josh care for two delightful canines, Rosie and Moo. Both were adopted from shelters and both bring them immense joy. Ellen writes:

We adopted Rosie in October 2011 and have had her since she was a puppy. The driving force was simply that we wanted a dog to take care of, and she had a sweet demeanor among all the other puppies available. We’ve had her for nearly her entire life and have grown a strong bond — she is very obedient, intelligent, and has a great demeanor around people.

​We adopted Moo in 2018 because we wanted a playmate for Rosie. Moo had a history and a previous owner, and he spent some time in the shelter as an adult (he was 3 when we adopted him and had been in the shelter for about 8 months), so his personality reflects some insecurity/abandonment as a result of separating from his previous owner and his previous dog companion (who was adopted from the shelter before Moo). He’s not quite as obedient as Rosie, but has made great strides in the two-ish years we’ve had him. He’s also very bonded to me.

Moo and Rosie in bandanas, photo courtesy of Ellen Lewis

They’re great together. They love playing together but, more than that, they enjoy just hanging out together. I’ve caught them curled up together on the couch more than a few times. I’m not sure of Moo’s personality before we had him, but I can tell he finds comfort in Rosie’s presence and has no problem letting her be the leader between them. On the flip side, Moo seems to have brought out a more playful side in Rosie. We’ve always called her a “people dog,” because she gravitates toward people and not other dogs (in the dog park, out in public, etc.), but she sure has become more playful since Moo came around.

We love taking them on hikes around the area — it’s great exercise for all of us and the dogs get some great physical and mental stimulation.

We also taught them to hug one another on command when we ask “Who’s your best friend?” So really, it doesn’t get any better than that!

Ellen also noted that she and Josh had no idea what they were going to get when they adopted these pups, explaining that it’s hard to know a dog’s breed or even how the dog’s personality will come across when you get him home and he spends time around the family, including other animals.

Based on this variability, it’s important that, when you adopt a dog, you don’t go in expecting the dog to be a certain way, but that you are prepared to love him and to be patient as he adjusts to his new home.

Dogs aren’t the only companion animals! 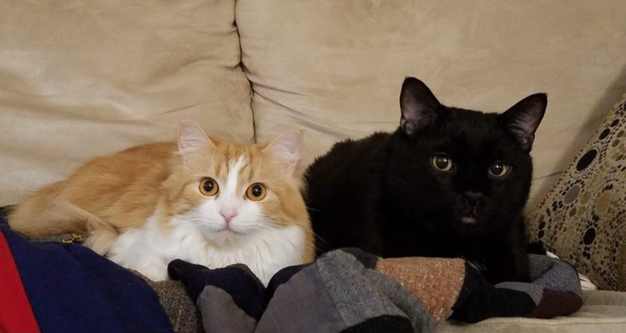 People often say that dogs are “man’s best friend,” but there’s no better friend than my cat, Freyja–except maybe Loki, our cat who passed away last year. Besides being adorable and low-maintenance, there are tons of great reasons to adopt a cat.

For one thing, did you know that house cats are not indigenous to North America? Yep, and a 2013 study published in Nature Communications tells us that domestic cats kill somewhere between 1.4 and 3.7 birds in the lower 48 states each year. The Audubon Society recommends keeping domestic cats indoors as much as possible. I know, when I look into the eyes of my sweet, clumsy, apparently-helpless Freyja, I don’t see a killer staring back, and yet… 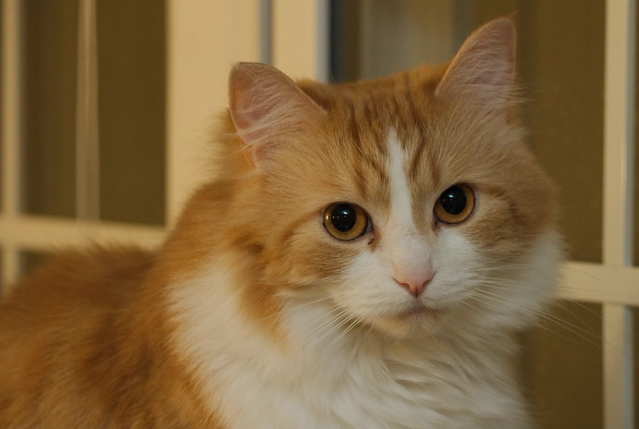 While the question of how to minimize the damage posed by feral cats is obviously fraught, the very best way I’ve found to make a difference is to get feral cats off the streets (and out of the back yards and local farms and forests where they can decimate local bird populations), spay or neuter them, and then bring them into my home where they can live long, happy lives in a warm environment with plenty of food and veterinary care, without damaging the local ecosystem.

If you haven’t considered adopting a cat before, I highly recommend you think about it! They are great for young people who don’t spend a lot of time at home, people who work long shifts, or elderly people who struggle to keep up with dogs’ exercise and socialization needs.  They don’t need to be housetrained and they are independent. And look at those faces! It’s impossible to resist these beauties.

At the end of the day, companion animals bring us tremendous joy, especially in times of increased loneliness that many of us are experiencing or have experienced in 2020. We can help other living beings by bringing them into our homes, and the animals at your local animal shelters will bring you as much or more joy than any bought from a commercial breeder. If you have the resources to care for an animal and the local shelter near you has animals that need homes, it’s a great idea to adopt, not shop!