When it comes to hunting, the vision most of us have in our heads is that of bright-orange clad hunters out in the remote woods of Western and Central Pennsylvania, but this is not always the case. Did you know that Pennsylvania’s hunting laws allow for inner city hunting?

HAP member Louis Depellegrini did not, and was shocked by what he witnessed in his backyard, as described below in his own words:

“I never knew that inner city hunting was permitted in cities until I captured two hunters on my digital camera tracking deer on a neighboring public elementary school one Saturday morning.

I saw them from my bedroom window.

They had bows and arrows; did not wear proper attire and were several feet from a busy street and a pedestrian sidewalk.

There were rows of residential homes below with backyards where pets or kids could have been.

Unsuspecting people or pets could be in an unsafe situation; what if mistaken for a deer.

Plus an arrow or a bullet have no way to stop if a deer target is missed.” 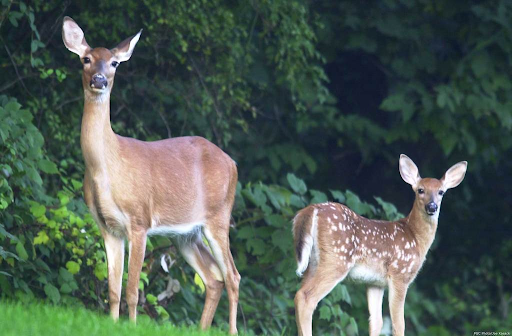 Like Louis, I did not realize that hunting within city limits was allowed by Pennsylvania’s hunting in that it is not strictly forbidden. There are no regulations that specify where hunting should occur, except for the following:

Safety Zones: It is unlawful to hunt for, shoot at, trap, take, chase or
disturb wildlife within 150 yards of any occupied residence, camp, industrial
or commercial building, farm house or farm building, or school or
playground without the permission of the occupants. It is unlawful to shoot
into a safety zone, even if you are outside of the zone. Driving game, even
without a firearm or bow, within a safety zone without permission is unlawful.
For comparison, think of a safety zone as about one and a half
football fields. Hunting on hospital and institutional grounds, and in cemeteries,
is also prohibited. It is unlawful to discharge a firearm within 150
yards of a Game Commission vehicle whose occupants are releasing pheasants.
The safety zone for archery hunters statewide is 50 yards. This also
applies to crossbows during any season where they can be used. Archery
hunters carrying muzzleloaders during any muzzleloader season must abide
by the 150-yard safety zone regulation. Around playgrounds, schools, nursery
schools or day-care centers, the safety zone remains 150 yards.

I, too, have seen hunters, not on my property, but within close proximity to the PA Turnpike, which I have a view of from my backyard. The familiar site of orange safety gear fills me with dread every time I take my three dogs out. If I can see them, can they see me and the dogs and discern that we are not targets? I trust that we are probably safely outside of the bounds of the guns’ capabilities as far as distance, but what if we’re not?

And what of other areas? I have seen hunters walking along Lincoln Avenue in the Lincoln-Lemington section of the city, not far from East Liberty, Highland Park, and other areas with high density populations. It was obvious that they were hunting within the cemetery along Lincoln Avenue, but there are quite a few houses that surround the cemetery itself – who or what will protect the residents of those buildings?

Besides the potential damage to people and pets, hunting has been shown to not curb the deer populations in our neighborhoods. In fact, studies have shown that the deer population has steadily risen over the past several years. As suburban sprawl continues to rise, leading to more development on what was once open land, deer encounters have risen, leading many to want to cull deer in order to protect their property such as cars, or gardens. However, this is the price of living in such an area – sharing it with the wildlife that was there before. Allowing hunting so close to areas where adults, children, and domestic animals are present makes the idea of hunting within city limits that much more dangerous than any threat that the deer might pose.

So, you’re asking, what can we do? Several things: