Betta fish are widely believed to be an easy-to-care for “starter” fish, needing nothing more than a bowl to swim around in and their own company. Unfortunately, there is a plethora of misconceptions surrounding betta fish, much to the extreme detriment of these beautiful, sentient creatures

Danger in Procurement and Transfer

While some bettas are captured in the wild, the vast majority of those sold in the US come from breeding farms in Thailand and other countries in Southeast Asia, where it is common practice to keep them in small bottles. When it is time to pack them for transport, fish are haphazardly dumped into baskets covered with nets and scooped into tiny plastic cups. Then, they’re packed up to be sent to the US. Common pet store suppliers, like Segrest Farms, admit to sourcing bettas from Thailand.

When betta fish are shipped to countries around the world, the journey can take several days. Bettas are commonly transported without any food and barely any water

Workers have told eyewitnesses that a tranquilizer is added to the water so the fish won’t eat their own tails in desperation. During transport, bettas are confined individually to incredibly tiny bags that are stuffed into boxes and then stacked up high in massive wholesale warehouses

Many bettas die before reaching their intended destination. According to one pet store worker, a well-known supplier often ships 100,000 betta fish per week to the U.S. and up to 1,000 of the fish die before they reach distributors. 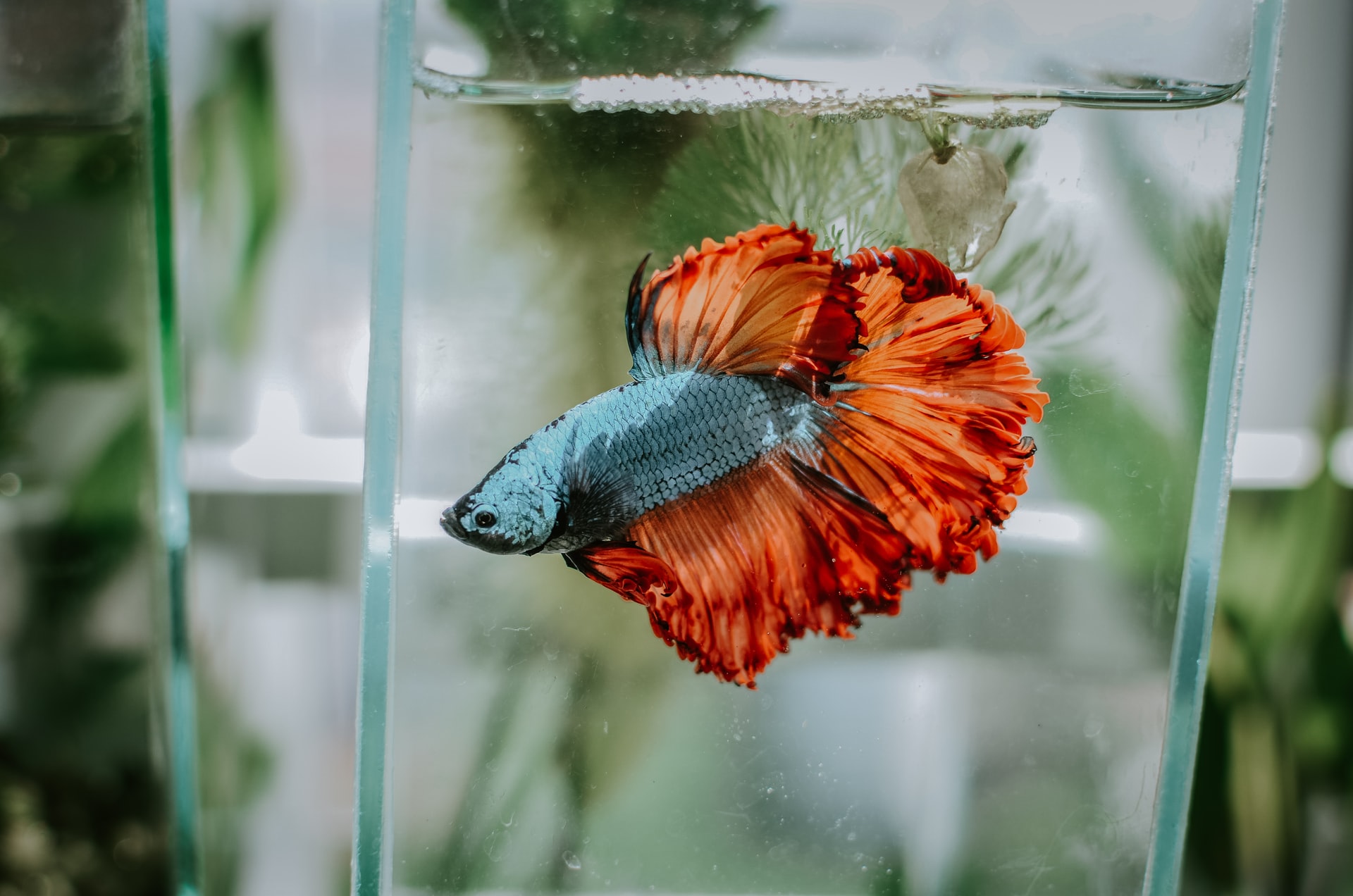 Photo by Khoa Pham on Unsplash 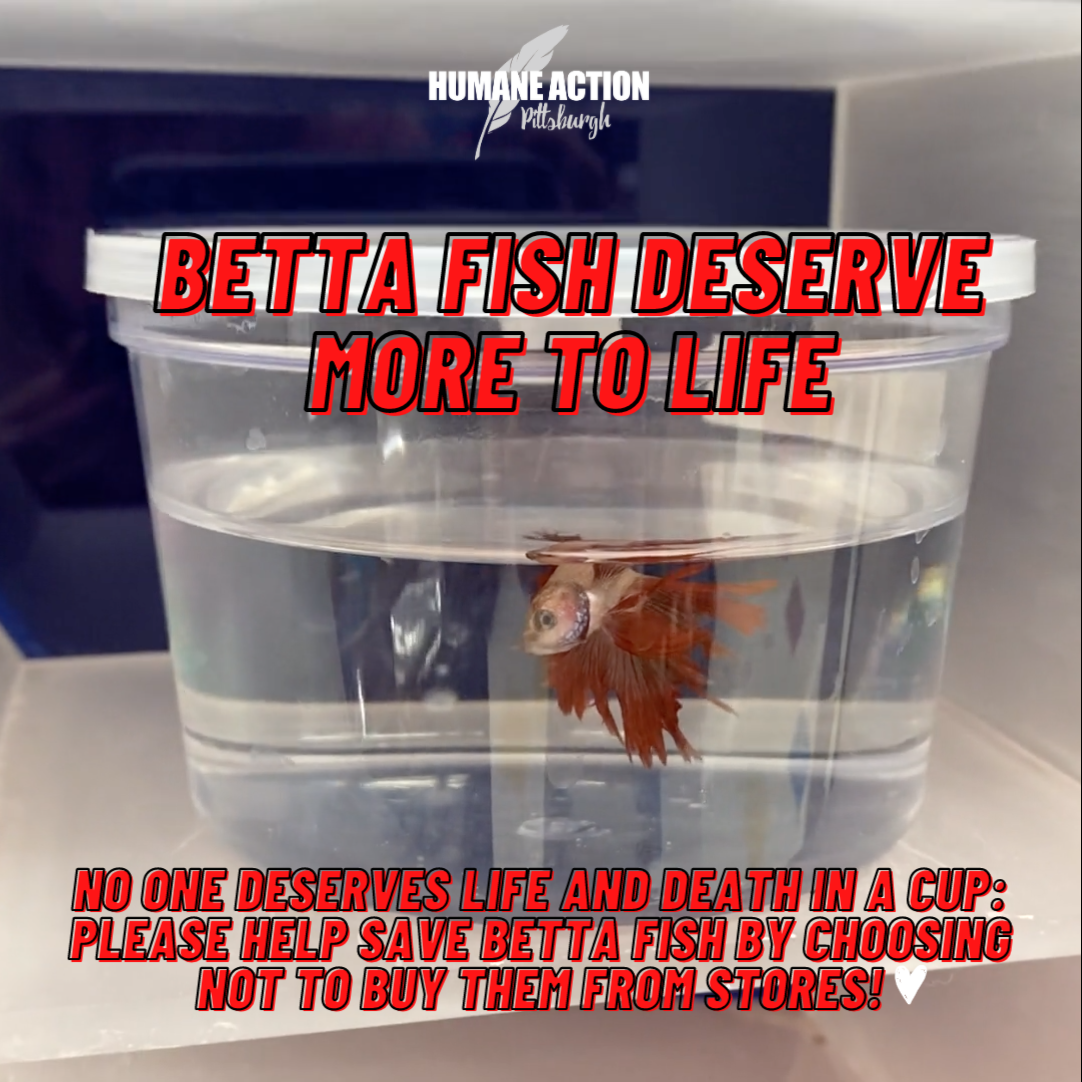 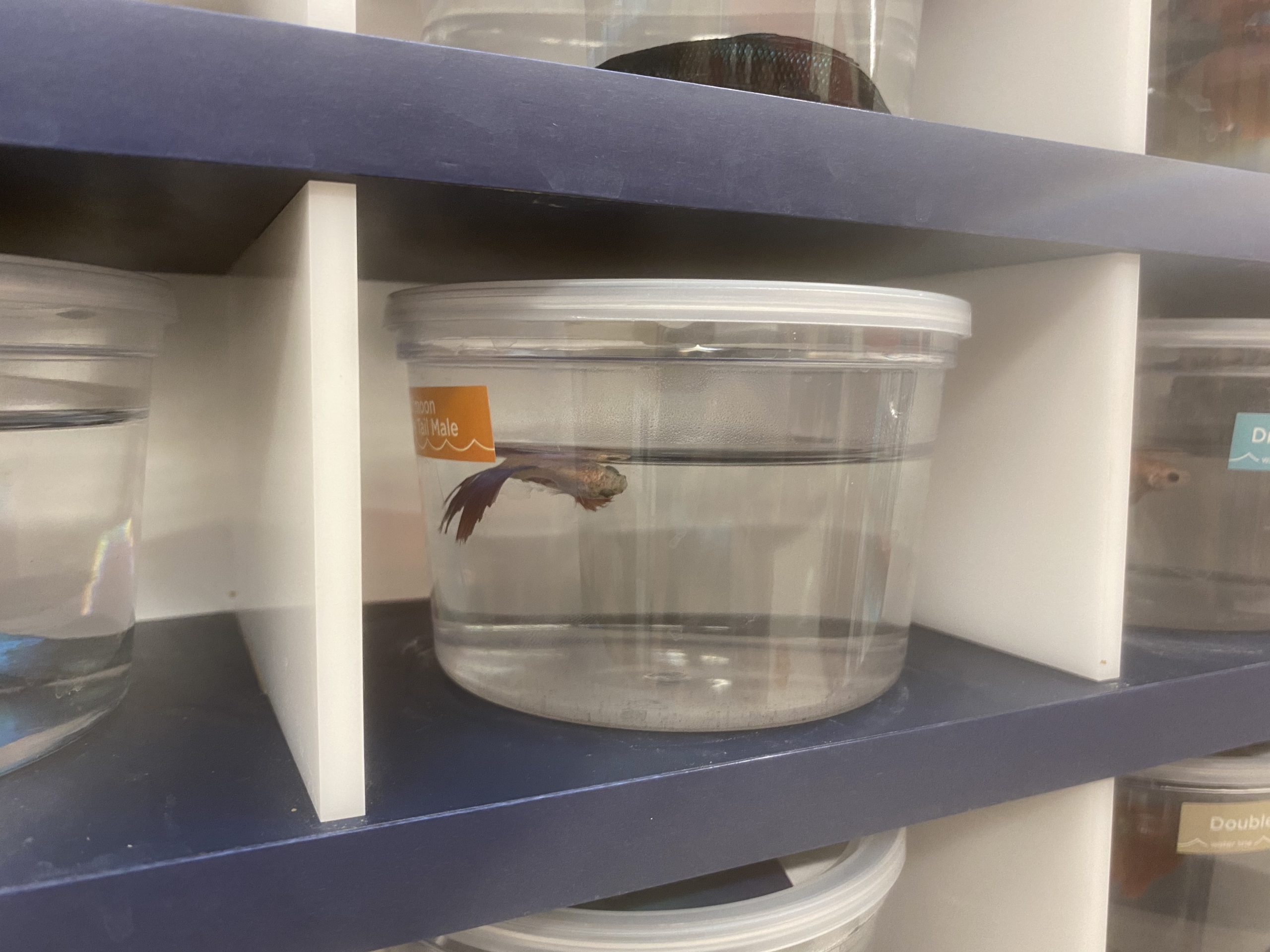 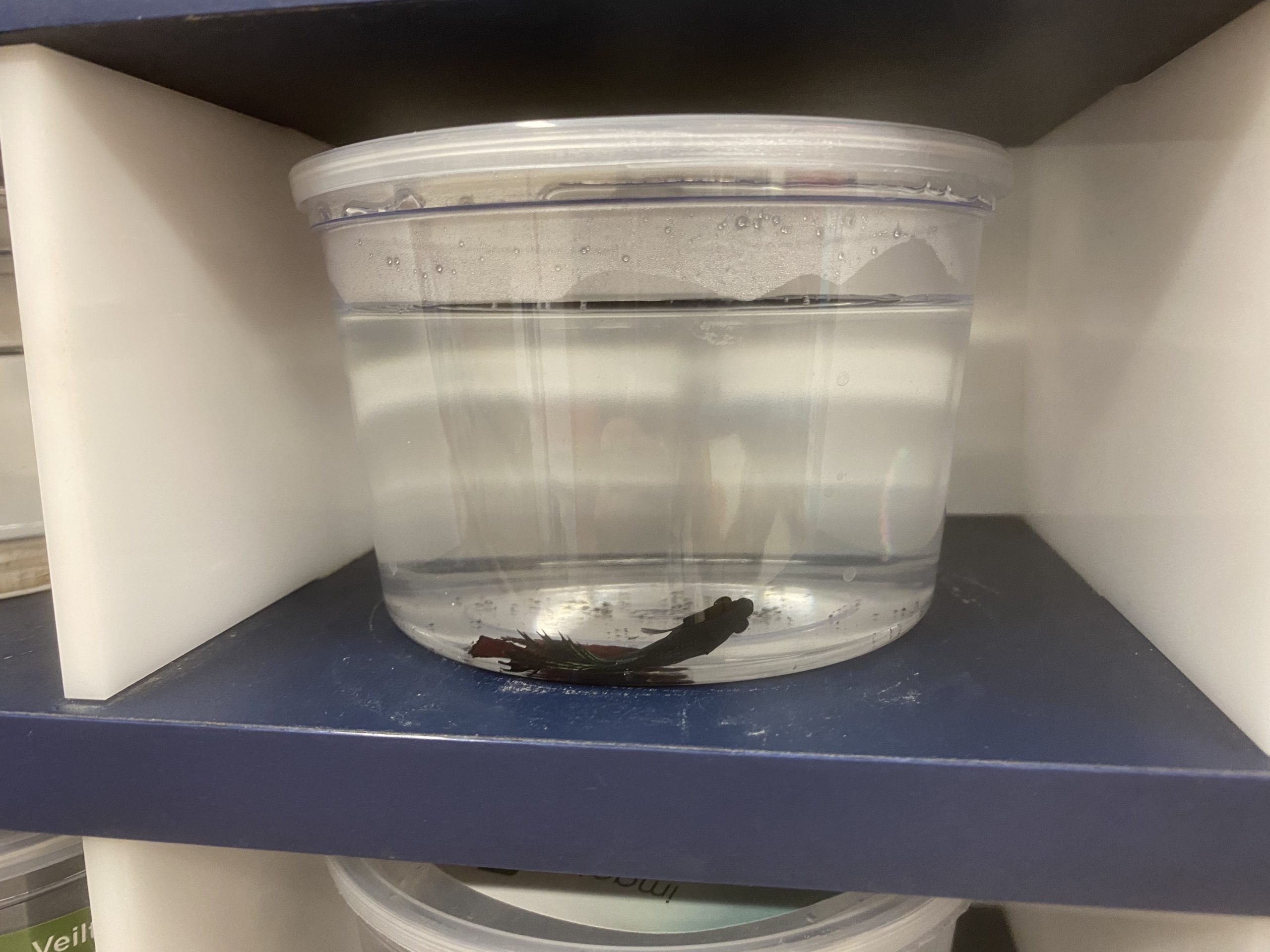 Undercover investigations of more than 100 pet stores across the country have revealed widespread suffering and neglect of betta fish. Dead and dying fish were found floating in tiny cups of contaminated water, and some were left to suffer from painful or debilitating health concerns, even though they were clearly in need of veterinary care. Some specific eyewitness accounts include:

Instead of taking these fish to a veterinarian, employees simply guessed at diagnoses and left them to suffer. A betta who had arrived at a store floating on his side because of a swim bladder issue was left to languish that way for months. The pet store’s solution? Sell the fish at a discount.

One pet store employee remarked that an ailing betta fish was likely forgotten about and was now “on his way to die,” even though the fish’s condition “could’ve been treated.” 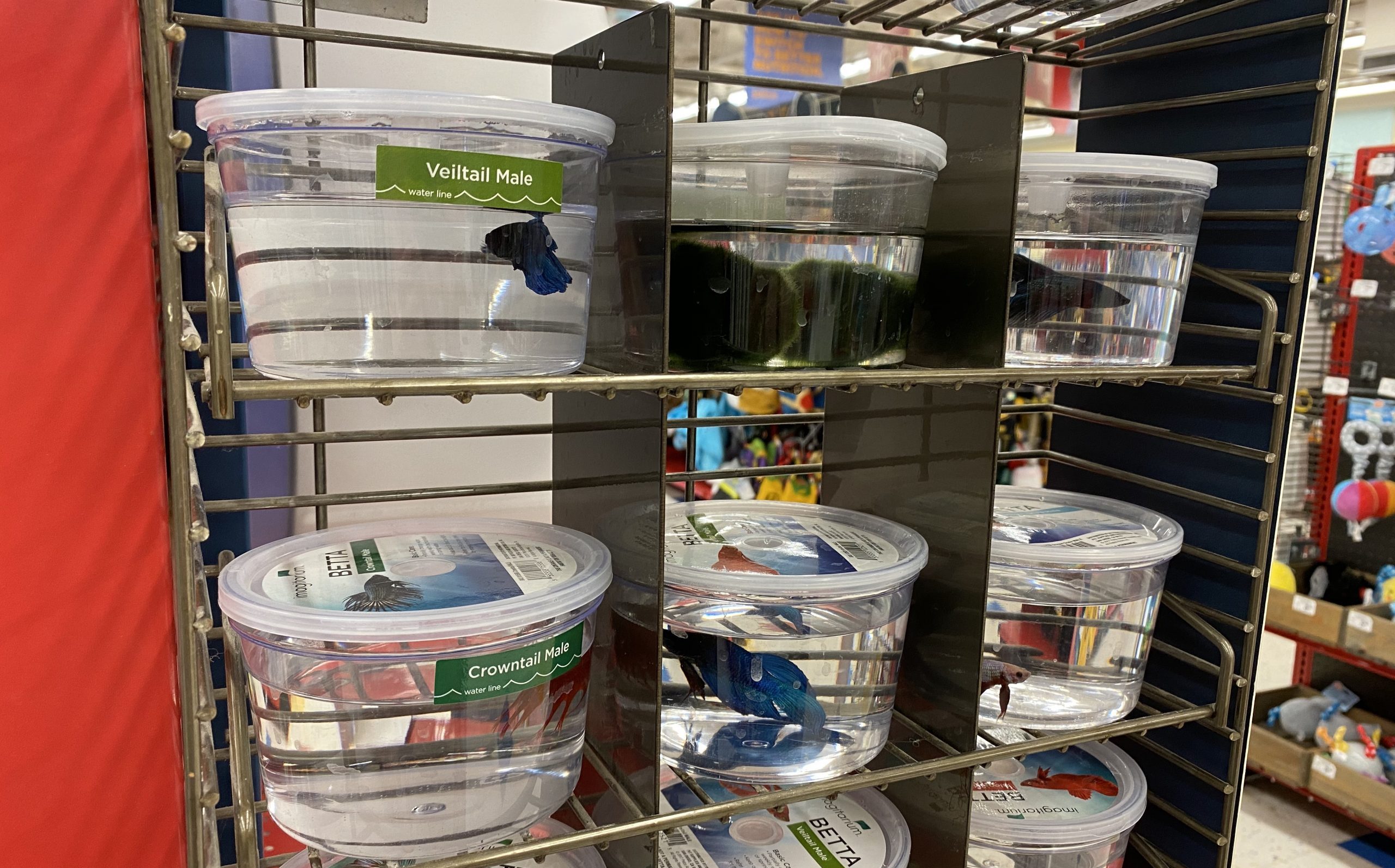 In the wild, bettas live in Asia, where their homes are the shallow waters of rice paddies, ponds, or slow-moving streams. Since those waters aren’t deep, they stay warm, which is why bettas who live in human homes require a regularly cleaned aquarium with at least 10 gallons of water heated to between 76 and 82 degrees Fahrenheit, a good filtration system, and enrichments, such as caves, rocks, and live plants.

Selling bettas in tiny bowls or cups perpetuates the harmful myth that Bettas are easy “starter” pets that must be kept in tanks alone. Bettas do NOT have to live alone. Female bettas can live together, and while male bettas will fight with other males, they can be placed in a “community” aquarium containing other species of fish

Plant roots are NOT adequate food for betta fish. Bettas are carnivorous animals who, in nature, eat mostly insects and insect larvae. Pet shops, discount superstores, florists, and even online catalogs sell “decorative” bettas in small cups or flower vases. The fish often live in just a few ounces of water, which is hardly enough to turn around in, much less swim in. In addition, keeping bettas in small glass or vases with plants makes it hard for them to breathe, because they get their oxygen from the surface of the water, and a narrow container with a plant can interfere with this. Further, a diet consisting solely of plant roots may keep them alive for a while, but since it lacks the proper nutrients for this species, the fish eventually become sick and starve to death.

Instead of swimming as far as they want in the wild, bettas sold as pets are forced to exist in tiny glass bowls or vases that are way too small and cold for them.

In addition to being forced to endure cramped conditions, these fish are denied everything that’s natural and important to them, which can cause them to become depressed. According to Victoria Braithwaite, a professor at Penn State University who studies fish intelligence, depression is likely prompted by lack of stimulation.

In study after study, fish are defying stereotypes: some use tools and others can recognize individual human faces. Male bettas are devoted fathers who build bubble nests for their young with their mouths and fiercely protect their babies from predators. Bettas stop killing each other and instead exhibit cooperative group behavior when they’re released from the “artificiality of captivity.” However, these sensitive fish continue to suffer greatly in the pet trade, where they’re subjected to inadequate care from the time they’re born on breeding farms to when they’re transported to pet stores and to when they’re ultimately sold. 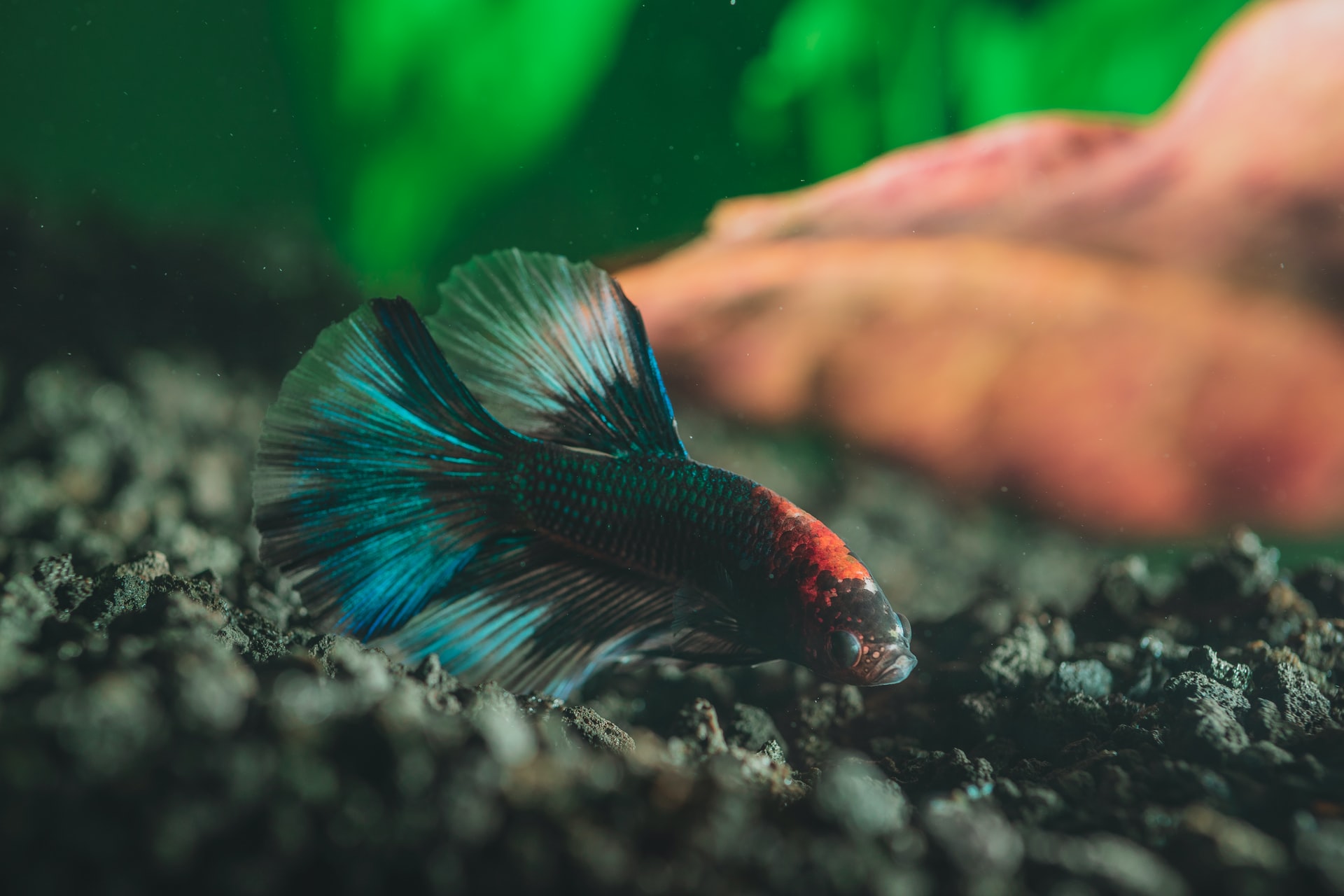 What Is HAP Doing About It?

Our first step is to educate the public of the inhumane treatment fish encounter when caught from the wild to be imprisoned in tiny tanks as pets or killed for food. Awareness is key while fighting for the lives of fish, who are capable of remembering past social interactions with other fish and show affection by rubbing up against one another.

Through our “Better for Betta Fish” campaign, we’re working with pet stores to stop the sale of betta fish as pets, leaving them in their natural habitat to thrive.

Change starts with you! If there isn’t a demand for fish as food or ornamental decoration, the supply and terrible practices will decrease. Please help us in taking a stand against the fishing industry and senseless lives lost.

Learning about the horrors of the fishing industry and the plight of Betta fish captured and sold as pets–and educating others about these issues–can help. You can also help to educate pet stores where you see injured, sick, or abused fish, if you feel comfortable doing so.

Your donation can also help us save fish from suffering or early death by funding us to educate and inspire the next generation on this important issue.