Last month, the month of Earth Day, there was a lot of talk about the supposed aspect of Biden’s climate plan that would limit Americans’ meat consumption to just one hamburger a month. While that claim turned out to be false…maybe the idea shouldn’t be dismissed so quickly. 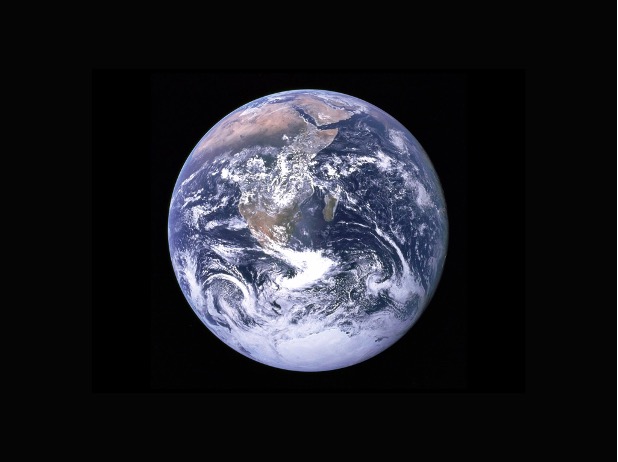 We all know that carbon emissions are a problem, and many companies and individuals are working hard to reduce their carbon footprints. The city of Pittsburgh has expressed concern about the impact of carbon emissions on climate and has implemented a Climate Action Plan, which states that “Pittsburgh has already begun to experience the effects of climate change with harsher winters, hotter summers, record setting precipitation, and increased numbers of invasive species. Coordinated, concentrated and comprehensive carbon mitigation action is needed to reduce the severity of regional impacts and prepare for low carbon economy.”

But if you read through it, there is no mention of meat or animal product consumption or production. But (for good reason) that wasn’t always the case. Previous versions of the city’s Climate Action Plan included a meat reduction goal of 50% by 2030, but that goal was removed. Why?

First, let’s look at the source of the rumors surrounding Biden’s climate plan. A University of Michigan study in 2020 examined the carbon emissions of meat, comparing several models of meat and animal product consumption. That study found that greenhouse gas emissions would be reduced to 51% by 2030 if beef consumption (hence the hamburger headline) decreased by 90% and all other animal-based foods decreased by 50%.

While some of you may already know about the environmental impact of meat and animal products, others may be scratching their heads, wondering what a cow or a chicken has to do with greenhouse gas emissions. Let’s explore that question.

Cows and other herbivorous livestock emit methane gas as a byproduct of their digestive systems. Methane is up to 32% more potent than CO2. That means that just existing and digesting grass creates greenhouse gasses on its own. Take into consideration the amount of food a cow has to eat (and then digest) in order to grow to the size considered appropriate for slaughter. All of that grain has to be transported to the large factory farming facilities where these animals are housed. And the animals’ waste has to be handled, too. 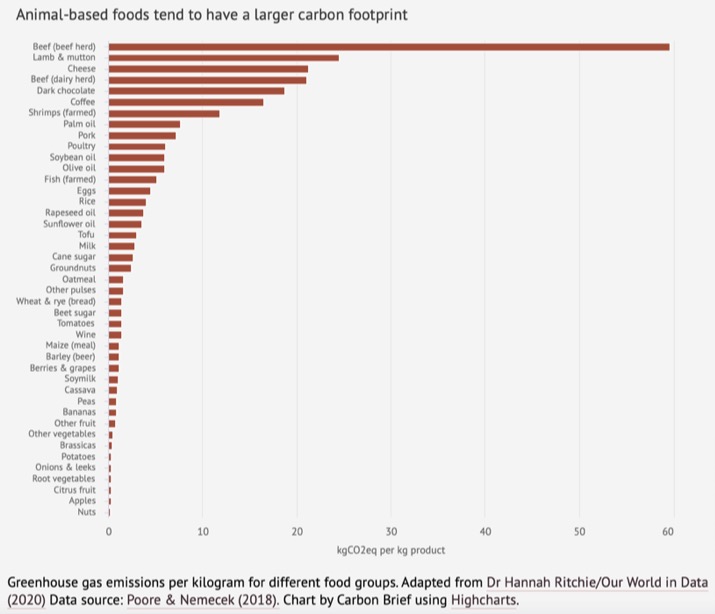 Of course, all animal products impact the environment in many ways outside of their greenhouse gas emissions. For example, this graphic shows the comparison between cow’s milk and plant milk in terms of both CO2emissions and water usage required. And UK-based organization Carbon Brief reports that “The conversion of land for beef production and animal feed is a leading cause of deforestation in many tropical regions, including in the Amazon, where a recent spike in forest fires and clearing has been linked to cattle ranching.” 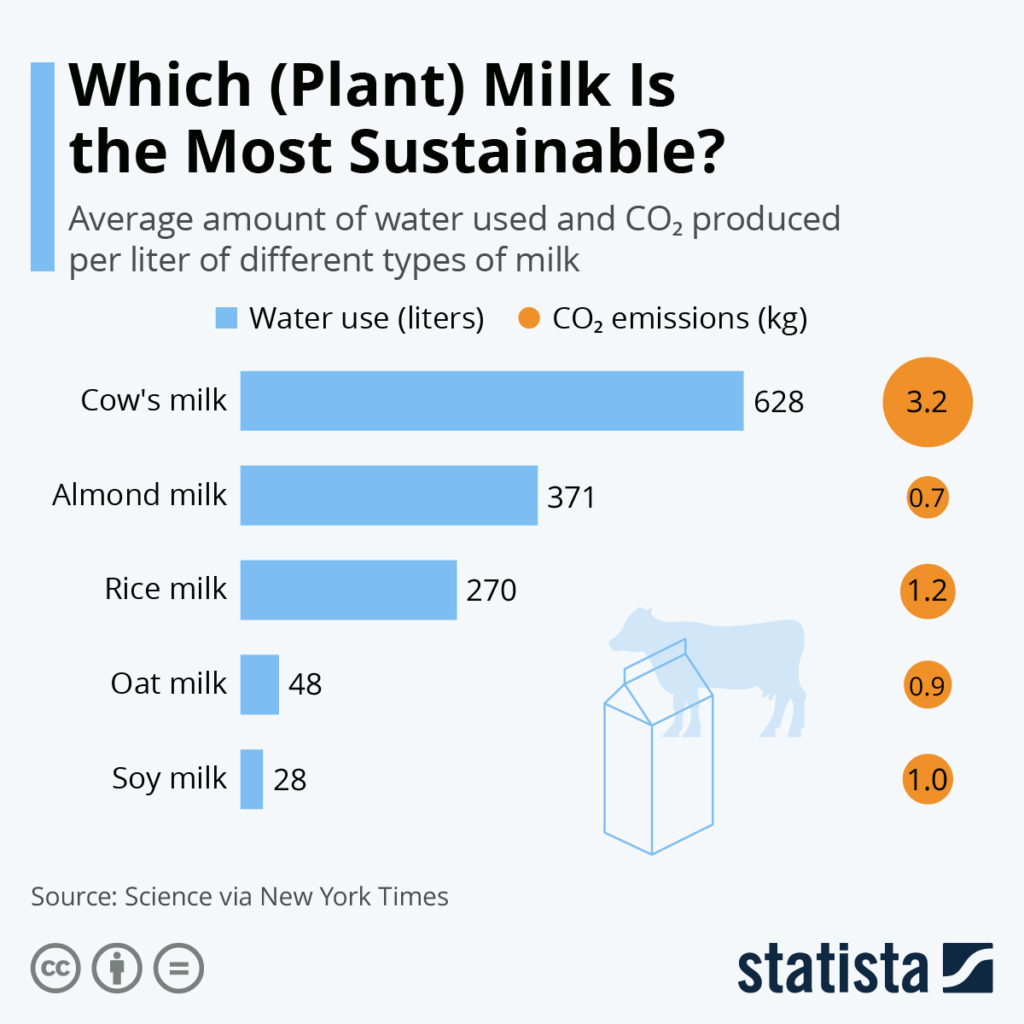 So when there are so many negative impacts for the environment when it comes to animal products, why is there such an uproar when there is even a suspicion that a politician may have an anti-meat agenda? Well, there’s almost certainly some level of outrage being manufactured by farmers who raise animals for meat or dairy, but at the same time, many Americans do feel a certain emotional attachment to what they may see as a basically patriotic act of grilling burgers in their backyards. Many people grew up eating meat and don’t want to stop.

I would suggest, though, that knowing what we know about the climate, omnivorous Americans should think of it this way: going vegan, vegetarian, or even just reducing animal product consumption is one of the biggest personal choices an individual can make to protect the environment, especially from climate change. And the 2020s seem to be the decade of the plant-based alternative, with plant-based milk gaining widespread popularity and the emergence of newer, flashier meat alternatives like Impossible and Beyond. 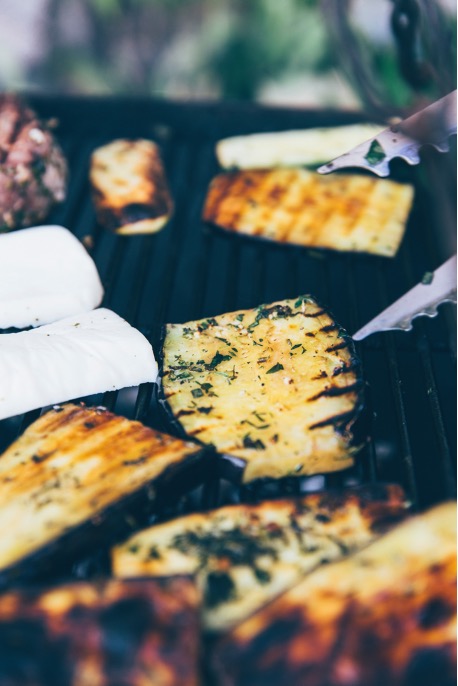 You can still have your cookout, and you don’t have to grill portabella mushroom caps in place of burgers or eggplant instead of steak (although, you never know, you might like it if you give it a try!). You can grill a Beyond Burger, and even slap on a slice of Violife cheese if you want to. Maybe it won’t feel the same to you as a beef burger, but when you consider the benefits for your own health and the immense suffering that farm animals experience just to put that beef burger on Americans’ plates, you might even come to the conclusion that the plant-based meal is even better.